Nov 27, 2018 @ 19:07:27
It was David Cameron, when he was Prime Minister, who said that they don't make politicians like the wonderful Baroness Trumpington anymore, who died yesterday aged 96.

So....who gives a damn about a geriatric Brit politician who none of you guys have ever heard of? Hey, this woman lived one heck of a life and is worthy of an obituary.

Actually, she was half American on her mother's side. Her mother was a Chicago heiress who lost all her money in the Wall Street Crash. Marrying into the British aristocracy hadn't been such a bad move after all, as it turned out.

Before WWII the young Jean Campbell- Harris became Aide de Camp to the Viceroy of India and during the war she worked with Alan Turing at Bletchley Park, one of the codebreakers who cracked the secrets of the Enigma Code. In the 1990's she led the campaign to have Alan Turing's conviction for homosexuality pardoned in memory of the man.

Her career in voluntary work and politics began after the war and went on for the rest of her life. It would take too long to summarise here but her career was an unbroken sequence of beneficial roles that endeared her to the people.

She was made a Baroness in 1980, and later honoured by France by being made an Officer of the National Order of Merit.

She was a popular peer and never stopped working for all the causes that were dear to her. She dominated the House of Lords with her tough negotiating, wit, intellect and an indomitable attitude that didn't suffer fools gladly.

When one Peer called her a "Relic from the war" she stuck two fingers up at him - with live cameras covering the debate. That's "F**k you" in Brit speak. Live on the BBC. The footage went viral and we loved her all the more for it.

Jean Alys Barker, Baroness Trumpington 1922 - 2018. Rest in Peace and thank you for your service to your country. 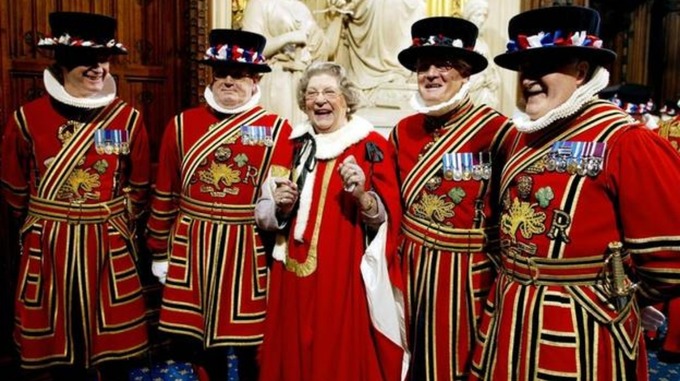