"White" and "black" are not proper nouns and should not be capitalized.

I'm not an English major but I do know that we should capitalize races, nationalities, and languages. I think that there might be a gray area in the rule when we use the terms "white" and "black" when referring to a racial group of people.

But please note that I am not an English major (smiles). However, I will look into it sometime this week.

Chachi -- there is no gray area - if white or black is used in reference to race, it should be capitalized.

You havent a clue about London estates Jonnythan. You dont need to study it in a little college. Most of us knew the people who was doing it. Or you at least heard the stories. First hand, not from a text book.

I think that I understand what you are trying to say but can hearing stories be considered first hand or accurate information?

When it comes to statistical information, you need to start somewhere. For example, I know that the U.S. Bureau of Justice Statistics (BJS) job is to collect, analyze, publish, and disseminate information on crime, criminal offenders, victims of crime, and the operation of justice systems at all levels of government. Their data is critical to federal, state, and local policymakers in combating crime and ensuring that justice is both efficient and evenhanded.

Could the BJS fudge their numbers or even make them up? Sure, but why would they? How would they benefit from lying about their statistical data? Even if they did, invariably the truth would emerge.

I'm not trying to offend you, I'm just trying to better understand your rationale.

May 10, 2010 @ 05:51:00
Oh, me I was just responded to the post that said white and black are not proper nouns and should not be capitalized.
I was/am referring to the fact that White and Black were also considered proper nouns when/if used in reference to race. At least it was so prior to the 50's. Because, back then, the race of the child, and the race of the parents, was on a child's birth certificate -- and it was always capitalized -- as it should be, since it was referring to the race of a person, which is a proper noun.
You posted there may be a gray area there somewhere. I disagreed.

As far as the OP goes - crime is not strictly related to race/skin color, nor is it strictly related to socio- economic status (poverty). However, any individual or researcher can always use THE SAME as justification for the reason why things are so bad, for instance for a specific person, or for a specific race. No matter what your skin color, no matter if you are rich or poor -- if you have self-pride, and good 'self values' - you'll avoid as much as humanly possible any behavior which could/would make you a criminal. Drugs/alcohol never help, cuz they negatively influence one's self-pride, self-values.
(And if I wanted a better understanding of crime anywhere, I would never assume anything ... I would collect the data, present it as it is, and cite the sources (interpretation of validity is left up to all those who are perusing your data). Trust yourself more then any statistics-- they're just a bunch of numbers that can be twisted to suit any researchers' needs!!

Chachi -- there is no gray area - if white or black is used in reference to race, it should be capitalized.


I kind of figured that there wasn't a gray area on the rule but I was 100% sure about it. Not getting much sleep because I'm studying for finals doesn't help either (lol). I just figured that I would research it when I had the time later on during the week.

Thanks for making that a bit more clear.

No special reason other than I was tired and didn't read over my post before submitting it. Sorry

Please, there is no reason to be sorry....really, I was just asking, I read somewhere about this and when I came across your post, I noticed it. I'am sorry if I made you feel uncomfortable, that was NOT my intent!

White and black are adjectives as well as nouns.
I am what I am.....
it says I am what I am on my birth certificate....
My birth certificate also says my parents were what they were, which of course make me 'what I am'.....
I am a noun, when you use it in that context -- in a racial context.
If you are saying am I black and blue, or yellow with jaundice, or brown from a good summer tan, then in that context color is an adjective.

I think I agree here! Thanks. 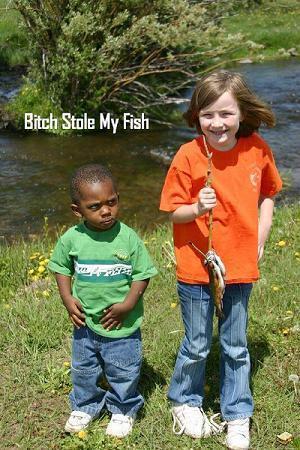 I kind of figured that there wasn't a gray area on the rule but I was 100% sure about it. Not getting much sleep because I'm studying for finals doesn't help either (lol). I just figured that I would research it when I had the time later on during the week.

Thanks for making that a bit more clear.


I'am so sorry....it seems as if I should have kept my big mouth shut! But I was just asking......I hope there are no hard feelings! Thanks.

Come on! Look at that kids face.. it's cute and funny!

Nothing. Dont worry about it. Just keep scrolling

May 26, 2010 @ 04:06:19
The Thing I often wonder about these statistics is how they get the statistics that they do and what groups do they count? Because the last time I research there were more White people in this country than blacks,hispanics,etc etc, So How is it that Blacks can commit more crimes, if they have less population, the statistics aren't going to be effective.The Statistics are gonna be higher in number because there are less people, And not just that even though we are past the Civil Rights movement, Racism is very much still alive and prevalent in our society, Racial profiling and the three strikes rule all have racist origins;which is why more black peopl,hispanic people are in the jails and countless others who have been jailed and falsely accused!The media also reports a lot of minority crimes and casts minorities usually as criminals. But In White neighborhoods a lot of crimes aren't reported, are covered up, or the media doesn't take interest in it!