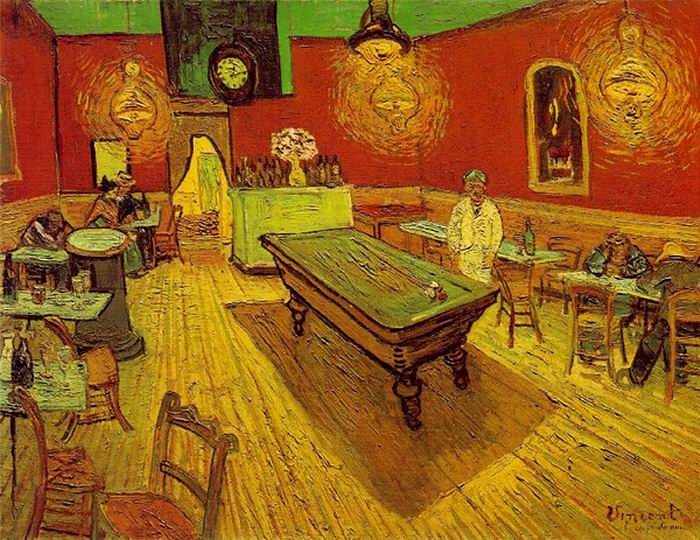 Let me stew on them a bit. I'm just a layman, but do appreciate art.

Dec 30, 2008 @ 05:01:33
Short answer, there seems to be no comparison, only contrast. One is of a polygonal style, and the other reminiscient to me of impressionist, because it's certainly not true to life.
But I think both do have one thing in common: things men want.

Dec 30, 2008 @ 06:17:35
Both paintings show the passions of human nature.
Van Gogh was going through a period in which he was trying to copy Seurat, but gave that up. This particular painting is most in shades of red and green. He was raised by a minister to feel that all passions of the flesh were evil and unspeakable. The painting doesn't express this to me it just looks like a pool hall, but the colors are the clue.

Picasso-Les Demoiselles d A'Avignon-
Picture this painting 8'x8' staring you in the face. It was considered outragious and offensive. It's a much more in your face version on the same topic. Lust seems to be at the core. He has painted five women in a brothel, none of them show any signs of emotion. They're primping and painted in a very ugly way. Both painters seem to opt to paint for sexual freedom. Picasso is much more overt in doing so. This painting was thought to be one that would end his career. It was hidden for many year. I've seen it at the MoMA and to say the least, it's just ugly.
Both artists painted symbolicly but defininely had styles that were completely different.

Sorry-raised by an artist, this is just the tip of the iceberg on these paintings.