Nov 29, 2019 @ 14:22:55
The gunners current winless streak stands at seven games in all competitions – this is their worst winless competitive run since February 1992!

And so once again the League Cup is coming home to Paradise...

They've won the Carabao cup (the current sponsorship name for the Football League Cup) for the last two seasons and are in this season's Semi Final so that must be what you mean, although quite why you'd use the words to a Glasgow Celtic fan song to express it I don't know.

I do think though, that Celtic are in with a good chance of winning the Betfred Cup (the current sponsorship name for the Scottish League Cup).

Anybody who knew anything about British football would know that.

Dec 30, 2019 @ 07:40:39
Nice to see you pushing commercial sponsorships. I'm sure you do the same thing with the various footy grounds that are known by commercial names. Me, not so much.

As for the City of Manchester Stadium being known as Paradise...

There has never been a time when either the English or Scottish versions of the competition were simply called "The League Cup."


And I suppose there has never been a time when the "The Football Association Challenge Cup" has been simply called "The FA Cup"!

You do realise that what officials call a competition and what fans call it are not always the same thing? No of course you don't. But why would you when you have posted on a number of occasions how much you loath footy fans.

Back to the League Cup. All of the football fans I have ever known have always referred to the cup in question as the "League Cup". I have for example never heard a Scottish fan proclaim that their team won "The Scottish League Cup", never mind the bloody "Betfred Cup". I suppose you think the fans talk about how their team is doing in the "Ladbrokes Premiership". Wonder how many City fans spoke about their team lifting "The Emirates FA Cup" last season.

He also became the highest ever non-British goal scorer in the premier league with his second goal in this game. Thierry Henry's record of 175 is now Sergio's record of 177 - and counting.

Not bad for a crock. 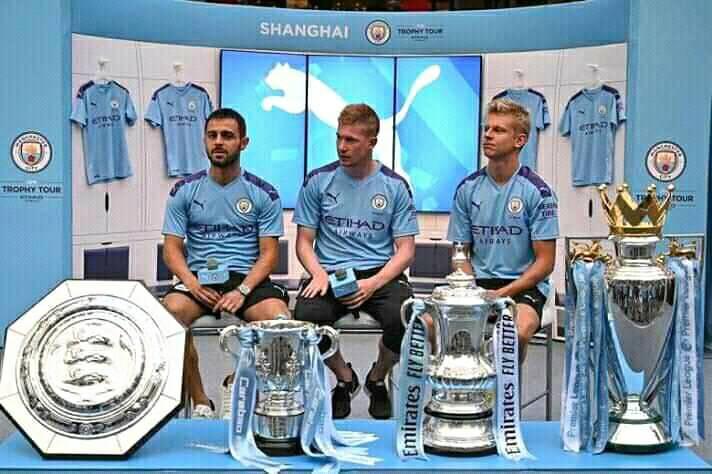 What a great result for the Cityzens. A fantastic performance in the Bernabeu where they dominated play for long periods.

They lost LaPorte midway through the first half and shortly after half time yet another costly slip by Otamendi let Madrid in to take the lead.

A Gabriel Jesus header followed by a crisply taken penalty by new captain Kevin de Bruyne put City ahead in the tie, with a one goal lead and two away goals in the bank to take back to Eastlands. Madrid will need to win the second leg, scoring at least two goals in the process.

UEFA have issued a two year ban on European competition due to financial irregularities that have nothing at all to do with football or the players.

How fitting it would be if the last thing they do in European football for the next two seasons is receive the Champions League trophy from Michel Platini's hands in Istanbul in May.

And it would be a travesty of sporting ethics if they won the trophy and were denied the right to defend their title next season.

Still, there is a long way to go before that happens. Madrid will come at them in the second leg, and even if they get past this stage, they would have to overcome other teams such as Atletico or Bayern Munich who look set to remove Liverpool and Chelsea respectively.

City are appealing their ban. We must wait and see how that pans out.

Will be interesting to see hoe City go without Sergio Aguero in the next few weeks.


Rested against Leicester last Saturday. Gabriel Jesus scored the only goal in the win at the KP.

He might play against Villa in the League Cup Final on Sunday. He's fit and raring to go. But Jesus is hot to trot right now so he may find himself benched again.

And so Liverpool's long run of eighteen consecutive Premier League wins comes to an end one short of establishing a new record. They have equalled the record set by Manchester City but not beaten it. But what they have done is a magnificent achievement.

Jurgen Klopp made the mistake of thinking that Watford were there for the taking and fielded a weakened team, presumably to rest some players for the second leg Champions League match against Atletico Madrid in the week.

To put tonight's result into perspective, this is only the second Premier League defeat for Liverpool since the start of the 2018/19 season. Their only other defeat was in January 2019 at the Etihad Stadium when City beat them 2-1. That is one heck of a record and deserves respect. Kudos too, to Watford who weren't intimidated by Liverpool's record tonight and came out and had a go. Liverpool weren't outplayed, but they were out-fought.

Liverpool currently trail Atletico Madrid 0-1 from the first leg and know that if Atletico score one, Liverpool will have to score three to progress. When you play the first leg away from home, you HAVE to get an away goal or the advantage lies very firmly with the opposition.

I still expect them to beat Atletico though. I think they can get three goals for the Kop.

But they will have had a long journey home tonight having tasted defeat for the first time this season. It won't stop them winning the Premier League but it will put the celebrations back by at least one match and they won't equal Preston North End and Arsenal in going an entire league season unbeaten (Preston were unbeaten in ALL competitions in 1888/89. They are the true 'Invincibles' no matter what the Gooners claim).

It's a bit of a moot point, but tonight, Liverpool went home from North London empty handed. Tomorrow, City will be just a few miles away at Wembley where, if they beat Aston Villa in the League Cup Final, they will come home with the first available trophy of the season, their 7th League Cup win, and be closing in on Liverpool's record of 8 wins in the competition.

I suppose that's fair in a way. Liverpool have equalled City's record of 18 consecutive Premier League wins, City will get closer to Liverpool's record of League Cup wins.

And I suppose there has never been a time when the "The Football Association Challenge Cup" has been simply called "The FA Cup"!

You do realise that what officials call a competition and what fans call it are not always the same thing? No of course you don't. But why would you when you have posted on a number of occasions how much you loath footy fans.

Back to the League Cup. All of the football fans I have ever known have always referred to the cup in question as the "League Cup". I have for example never heard a Scottish fan proclaim that their team won "The Scottish League Cup", never mind the bloody "Betfred Cup". I suppose you think the fans talk about how their team is doing in the "Ladbrokes Premiership". Wonder how many City fans spoke about their team lifting "The Emirates FA Cup" last season.

What are you drivelling on about you pig-ignorant antipodean poseur..?

Of course football supporters don't use the proper term. They're all as thick as mince and live and die by a code of meaningless cliches and dumb songs that glorify hooliganism, racism and homophobia. I agree with you when you say I hole football supporters in contempt because I do. Don't think for one second that I've got any problem with being called out on that fact.

What I do care about though, is the game. I love it's pace, it's athleticism, it's ability to thrill and lift the spirit. The game itself is magnificent. it's wasted on the morons that follow it.

You fall into that category with your relentless attempts to identify with a sport that is big in a country you hate by using slang terms that nobody here has used since the last century. Zombie Huns...? really..? Oh, do behave. That is just sooooooooo 1970's.

I'm not necessarily a football fan. Rugby Union, the Olympic Games (summer and winter) and Netball are my true sporting passions but I commit to football because it is what the English identify with the most. It's special to us as a people and frankly, being lectured on its culture by an Australian is like an Argentinian telling Einstein that physics should never be taught by Germans.

All I'll say is that if you want to discuss football, I'll go toe to toe with you on any point you care to mention and I reckon I know more about the game than you do.

If however, you want to continue being a t*** go right ahead. I expect it of you.

But I'm here and you're twelve thousand miles away (not far enough in my opinion) and I've got my finger on the pulse of English football.

We can do this one of two ways. You can learn to accept what I say as having some relevance... which I know you will hate doing because I'm a woman and that is anathema to Australian men. But here in England, we've earned a certain level of respect by showing that we know our stuff.

The alternative is to carry on as we are, b****ing and sniping at each other which, and you might find this difficult to believe but it's true.... I don't enjoy. I'm just not going to be howled down by an intellectual inferior.

Learn to accept that I have a knowledge of what I'm talking about and a passion for the sport of football and you and I can have a more constructive dialogue. Goodness knows, we're the only two on this forum who ever talk sport.

I believe you're a sexist, mysoginistic pig-ignorant Aussie Male. Prove me wrong by accepting a woman as an equal in this forum and discussing football in particular and sport in general fairly for the first time in your miserable life.